You may have already heard of bone broth, especially since its popularity as a health food keeps growing. As a result of the popular craze, you could be wondering what this weird soup has to offer. According to its fans, bone broth is a cure-all, an all-round remedy for any and all illnesses.

Although it might sound a little bit disgusting at first, bone broth is a lot tastier than it sounds, which is a minor factor compared to its potential health benefits. Read on, and you will most certainly find a reason or two to at least try this soup.

What is Bone Broth?

After a very long time, bone broth remains a staple in many diets the world over. It is essentially a soup base, preparation of which entails boiling cow, pig, chicken, or turkey bones and straining to filter the solids from the liquid.

Bone broth is the resultant liquid, and its preparation usually includes salt, seasoning, and an acid such as vinegar. The acid supposedly helps to extract nutrients from the bones.

As much as bone stock is almost similar to bone broth, you should not confuse the two. Preparation of bone stock does not involve an acid or seasoning, and although it makes an excellent and rich soup base, it is not known for many health benefits.

While the preparation of bone broth enables less wastage and more use of slaughtered animals, it also contains most of the meat’s nutrients in a palatable and relatively easy-to-digest form.

Where to Buy Bone Broth?

Bone broth is available in most supermarkets and health food stores. If you cannot find it offline, then you can also buy on Amazon.

What in bone broth makes this soup as healthy as it is?

Bone broth contains several essential minerals such as calcium, magnesium, phosphorous, and potassium, all of which are good reasons to take this soup regularly. However, there is more to bone broth than these four healthy nutrients.

Listed below are 12 health benefits of bone broth.

Some minerals found in bone broth improve the health of our immune system and ensure optimal performance. Calcium stimulates the body to release white blood cells, which allows our immune system to not only begin the healing process but also fight off potential invaders like bacteria and viruses.

Several reports show that both magnesium and phosphorous boost the performance of our immune systems. Although no scientific evidence indicates that bone broth as a whole directly contributes to a stronger immune system, it is undeniable that most of the nutrients it contains help to strengthen immunity.

Although reports indicate that in its entirety bone broth contributes to a much stronger immune system, whether it will actually help you fend off the next cold might as well be an issue of mind over matter.

According to people who have used bone broth, it good for the gastrointestinal tract. Bone broth contains gelatin, which not only helps to soothe the digestive tract, particularly the mucosal lining, but also aids the healing of its lining. As a hydrophilic colloid, the gelatin in bone broth attracts and holds liquids such as digestive juices.

Soothing the digestive tract and healing its lining supposedly contributes towards curing leaky gut, one of the conditions not yet fully understood by modern science. Although the science supporting bone broth’s digestive health benefits is still minimal and the potential gut healing properties of gelatin remain unstudied, trying it with the aim of improving your digestive system won’t hurt.

3. Limits the appearance of cellulite

Bone broth contains gelatin, collagen, and hyaluronic acid, all of which contribute to the elimination of cellulite. According to a number of health gurus, bone broth’s ability to eliminate toxins is what minimizes the appearance of cellulite.

Cellulite is not caused by toxins but by connective tissues under the skin that contort accumulated fat molecules to create the thick, cottage cheese-like appearance. Evidence, however, shows that collagen and some compounds in gelatin reduce the appearance of cellulite.

Although these findings are dependent on body mass index and not entirely conclusive, the chances that bone broth actually helps with this issue are high.

4. Contributes to a calm mind and helps you sleep

In addition to making you feel awful, not getting enough sleep or not sleeping well can lead to a variety of health conditions. By taking bone broth, you could improve your sleeping pattern and consequently get enough sleep.

Bone broth is rich in calcium and magnesium, both of which are known to alleviate insomnia. Bone broth also contains glycine, which is often utilized as a supplement when it comes to promoting restful sleep and a calm mind.

Inflammation is actually an immune response seeing as it sends white blood cells to injury or infection sites to fight off potential invaders and start off the healing process. Swelling, warmness of the affected area, loss of function, redness, and stiffness, and pain are all side effect of inflammation.

As supported by scientific evidence, there is some merit to the theory that bone broth works to relieve joint pains. Bone broth contains gelatin, which has compounds believed to be active in this case. Studies show that the compounds found in bone broth help to reduce joint deterioration.

Bone broth also contains glycine and proline, both known to reduce the inflammation that usually accompanies joint pains. These two compounds could provide a double whammy solution since joint pains are frequently the result of inflammation.

6. Helps the formation and repair of bones

The minerals found in bone broth are vital to the repair, formation, and growth of human bones. The ingestion of these minerals boosts your skeletal system. Below is a breakdown of how each individually contributes to the improvement of your skeletal system as shown by long-standing data.

Phosphorous: As the second most abundant mineral in your body, most of this phosphorous is found in bones, a primary ingredient of bone broth. Phosphorous works to ensure your joints, teeth, and bones remain strong and healthy.

Calcium: Thanks to prolific dairy advertisements, calcium is known as a contributory factor to the health of our teeth and bones. Studies show that taking adequate amounts of calcium helps to ward off osteoporosis or the weakening of bones.

Magnesium: In part, magnesium plays a role in the formation of bones since it is partly responsible for directing the activities of two types of bone cells known as osteoblasts and osteoclasts. According to research, adequate levels of magnesium result in ideal and healthy bone density levels.

Arthritis refers to the degeneration and inflammation of a joint, a condition that is usually accompanied by stiffness, swelling, and pain.
Bone broth contains sufficient amounts of compounds that help with arthritic inflammation.

Although most of these compounds are commonly ingested in the form of supplements, they contribute to the alleviation of arthritic joint pains and stiffness. Chondroitin, collagen, glucosamine, and hyaluronic acid are all frequently recommended for people living with arthritis. As such, the deduction that this healthy warm liquid helps to relieve joint pains caused by arthritis makes sense.

Bone broth contains collagen and gelatin, both ingredients of the supplements intended to ensure glowingly beautiful skin appearance and also enhance the strength of human nails and hair.

As the main structural protein in human bodies, deficiency of collagen contributes to the aging of our skin. Scientific studies evidently support the theory that collagen and gelatin reduce the effects of old age by improving the appearance of nails and hair. These two compounds also minimize several other visual signs of aging.

Likewise, the results of some studies show that using dietary gelatin as a supplement to improve beauty is effective. Although research in this area remains inconclusive, preliminary results show that women found their skin appeared better and felt firmer after taking gelatin supplements for a while.

Bone broth contains high amounts of glycosaminoglycans, which are the proteins usually abbreviated as GAG including chondroitin, glucosamine, and hyaluronic acid.

Bone broth is extremely helpful if you are looking to detox. Glycine is one of the compounds found in collagen, which bone broth contains. By helping to minimize the damage experienced by your liver once it absorbs foreign substances that should not pass through it, glycine supports the detoxification of your body. As such, taking bone broth on a regular basis is one of the easiest ways of cleansing your liver effectively.

Ensuring your liver functions properly is essential for your general health and well-being. Cleansing your liver removes toxins from your body, which is of uttermost importance since so many environmental toxins occur in our food supply, homes, and places of work.

Bone broth contains proline and glycine, technically nonessential amino acids, both of which can help you overcome food allergies. As much as it is true that your body is capable of making these two compounds whenever it needs more than what your diet supplies, consuming amino acids from food is more efficient than building your own.

Studies show that the human body is incapable of making either glycine or proline efficiently enough to keep up with its demand, especially in the absence of dietary sources. As such, taking bone broth will most likely help if you have food allergies.

12. It is an excellent source of mineral, essential amino acids, and healing fats

The health benefits of some minerals such as phosphorus, magnesium, calcium, and trace minerals are undeniable. While bone broth contains all of these minerals, it, more importantly, contains them in an easily accessible form for the body’s use.

Bone broth is additionally an excellent source of arginine, glycine, and proline, all important amino acids. While proline supports the health of your skin, glycine promotes a healthy digestive tract, central nervous system, and immune system. Arginine, on the other hand, promotes secretion of gastric juices, detoxification of your body, and digestion.

Since bone broth contains fats important in the restoration of gut health, which goes a long way towards ensuring your body absorbs the essential minerals found in bone broth quickly.

Although the consumption of bone broth sounds like a no-brainer, there are some concerns to consider. Glutamic acid, commonly referred to as glutamate, has potentially adverse effects on the human brain including seizures.

However, the amount of this compound in bone broth is most likely inadequate to cause any problem in most people. In addition, cooking bone broth for a shorter duration reduces the amount of glutamate contained.

Some concerns have been raised that bone broth could contain lead. However, the amount of lead found in bone broth is still way below the levels deemed acceptable. As such, it should not be too much of a concern.

As a general rule, making inquiries before you purchase any miracle cure statement is always advisable. Make sure you know every potential side effect of whatever natural remedy you decide to use, particularly when it comes to your health.

Confirming that your information is from reliable sources is also of significant importance.

Lastly, checking with your doctor before you try any new health remedy is always a good idea. Drug interaction and the worsening of symptoms are real possibilities, especially if you are not careful. Consulting with your doctor first is bound to help you avoid such issues.

Bone broth is perfectly healthy, and although the evidence supporting its health benefits might vary, the potential health benefits it offers far outweigh the risks of taking this soup. As much as many people do not always find such superfood claims realistic, the health benefits attributed to bone broth are reasonably plausible. Consuming bone broth is, therefore, advisable, especially since you stand to gain a lot and lose nothing.

Have you tried bone broth? Let me know in a comment below. 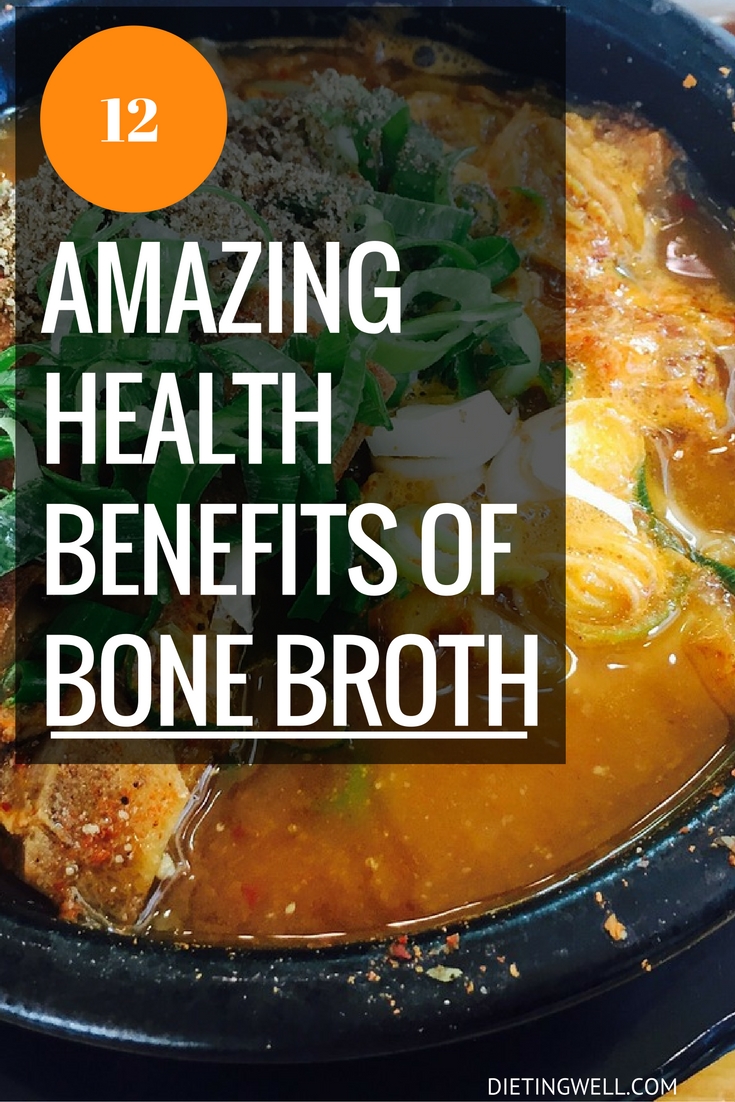 Stay updated like 3,000+ subscribers with our weekly FODMAP newsletter.

Send this to a friend